Gdev is an open-source CUDA software, containing device drivers, CUDA runtimes, CUDA/PTX compilers, and so on.

Detail implementations are described in the other paper that the author wrote, Implementing Open-Source CUDA Runtime. (link) 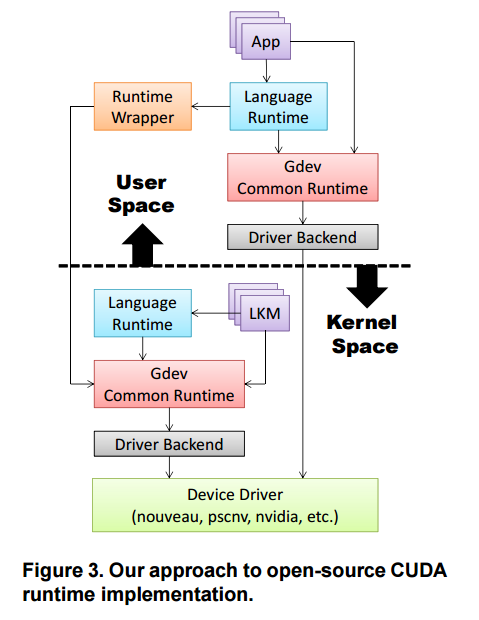 Gdev uses the existing open-source NVIDIA device driver, Nouveau. It also supports NVIDIA proprietary drivers and pscnv as well, pscnv is not maintained and NVIDIA driver is not an open-source. Gdev mainly works well with Nouveau.

It supports user-space runtime, so it can perform a GPGPU application with only Nouveau device driver. However, it requires root permission to be executed, I uses additional device driver called gdev. To use it, compile Gdev with the following commands.

Different from the instruction in the author’s Github, I set user parameter OFF to make driver backend reside in kernel space, so running CUDA application do not require root permission.

Gdev follows GPU’s resource management model, which is illustrated in [here]. So it allocates memory regions in MMIO, writes commands into that MMIO region, and so on. This section will analyze function calls from a basic example CUDA application.

All gdev functions call functions additionally implemented in Nouveau (/linux/drivers/gpu/drm/nouveau/gdev_interface.c). This file does not exist by default and Linux kernel should be patched by a patcher that the author provided.

As cuCtxPushCurrent() and gquery() does not use any Nouveau driver function, they will be passed.

When cuCtxCreate() is called, the selected gdev device is opened. The function for this purpose is gopen(). It is implemented in /gdev/common/gdev_api.c and will be copied into /gdev/release/mod/gdev/gdev_api.c after performing cmake.

It opens the device as well as allocates some memory regions for this context.

Note that gdev_drv_chan_alloc() says FIFO buffers are initiated by gopen(), not by itself. To check this, I also added a printk call in nouveau_fifo_channel_create_() function in linux/drivers/gpu/drm/nouveau/core/engine/fifo/base.c.

Note that FIFO buffer is created by gopen().

Actually, it creates one more buffer (desc buffer), however, it is allocated for Kepler GPU architecture, which will not be used by me.

After adding printk()s in gdev_raw_ctx_new(), the result is as follows.

The result says that __malloc_dma() allocates two buffer objects and memory regions each size of which is 0x40000.

Here is a detailed implementation of __malloc_dma(). It is located in /gdev/common/gdev_api.c.

gdev_mem_alloc() calls gdev_raw_mem_alloc(), which calls gdev_drv_bo_alloc(). After printing p_count, I found that p_count is 2. Hence two memory and buffer objects are allocated.

Note that this is a runtime library, not a part of gdev device driver, so printf() should be used instead of using printk(). Hence results are divided into userspace part, and kernel dmesg part. Note that I also added more printk() function calls in gdev_raw_mem_alloc_dma() and gdev_raw_mem_alloc(), which are implemented in /gdev/common/gdev_nvidia_mem.c. These functions are called by gmalloc(), as follows.

I understand two gmalloc()s are called for static data and code/constant memory, but where does two buffer object allocation come from?

This __malloc_dma() call comes from gtune(), defined in /gdev/common/gdev_api.c, which is called by gopen() in CUDA runtime library (defined in /gdev/lib/kernel/gdev_lib.c).

4-1. How gdev transfer the data into device?

The last function calls gdev_write32() or gdev_write(), both are defined in /mod/gdev/gdev_nvidia_compute.c. Also you can see that gdev transfers data in different ways in terms of its size.

This strategy is well explained in the paper Data Transfer Matters for GPU Computing [[link](http://www.ertl.jp/~shinpei/papers/icpads13.pdf)]. The author of Gdev is a coworker of this paper.

These functions are for MMIO defined in Linux kernel. For more information, visit [[here](http://www.makelinux.net/ldd3/chp-9-sect-4)].

4-2. How gdev get the MMIO address for the variable?

Now, we understand that the target address is drv_bo->map + offset (gdev_drv_write()), the first one of which comes from mem->map(gdev_raw_write()), which returns from gdev_mem_lookup_by_addr() in __gmemcpy_to_device().

Keep in mind that, all software must access to memory including MMIO via virtual address, not physical address. hence, what gdev_mem_lookup_by_addr returns is a virtual address mapped to dst_addr. For a[], printing the information is as follows.

As the name of the function is lookup_by_addr, and dst_addr is given as a parameter, gdev_mem structure would store both physical address and virtual address mapped to it.

For more detail, let’s see implementation of the function to see how it get objects with dst_addr. It is implemented in /gdev/common/gdev_nvidia_mem.c.

Then let’s figure out when gdev_mem object is created for each data. One good starting point would be __gdev_raw_mem_alloc(), defined in /gdev/mod/gdev/gdev_drv_nvidia.c.