The Open Container Initiative (OCI) standard is an open standard for Linux containers. As born in 2013, Docker has been a de-facto standard of Linux container framework, but the OCI standard was born for a need of open standard, based on the Docker manifest. As the standard is based on Docker manifest, its specifications and structures are very similar to Dockers’, enabling providing compatibilities between Docker and OCI-based container frameworks.

The OCI Image Spec is based on Docker Image Manifest Version 2.2. The architecture is very similar; hence docker images are convertible to the corresponding OCI image by using skopeo utility. 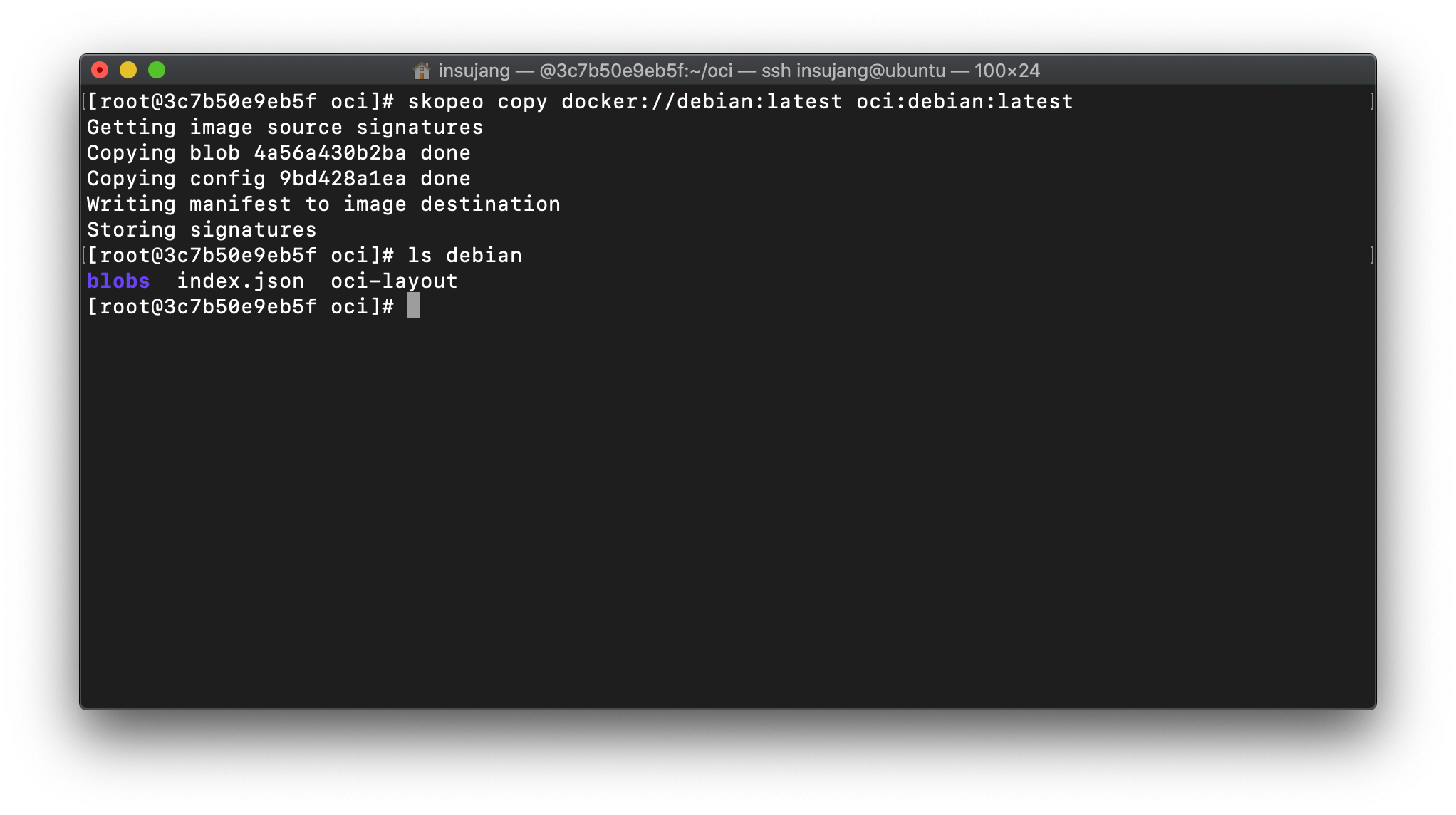 The OCI image layout of the Debian image from Docker Hub.

The OCI image consists of: 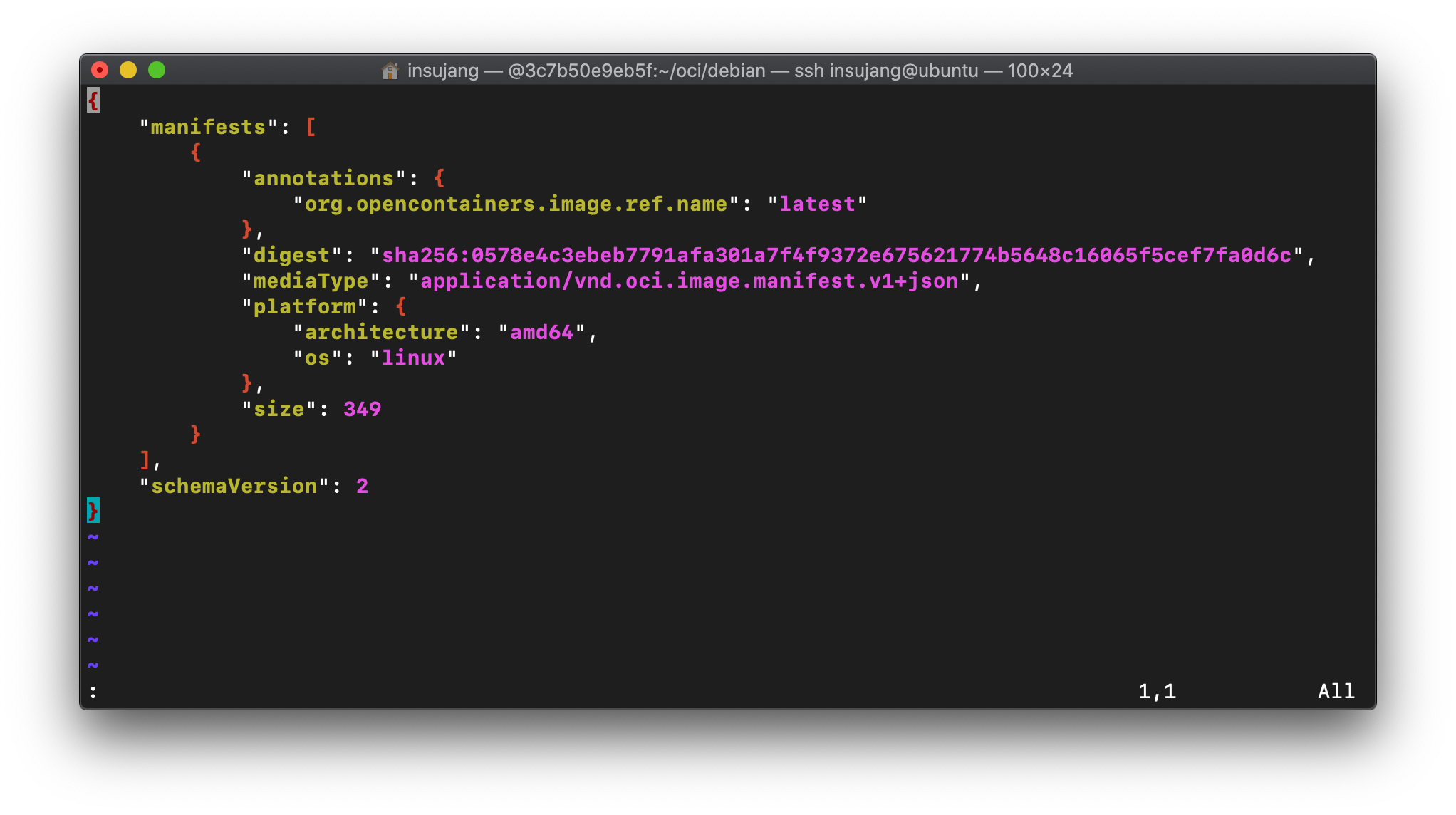 The contents of index.json of Debian OCI image. 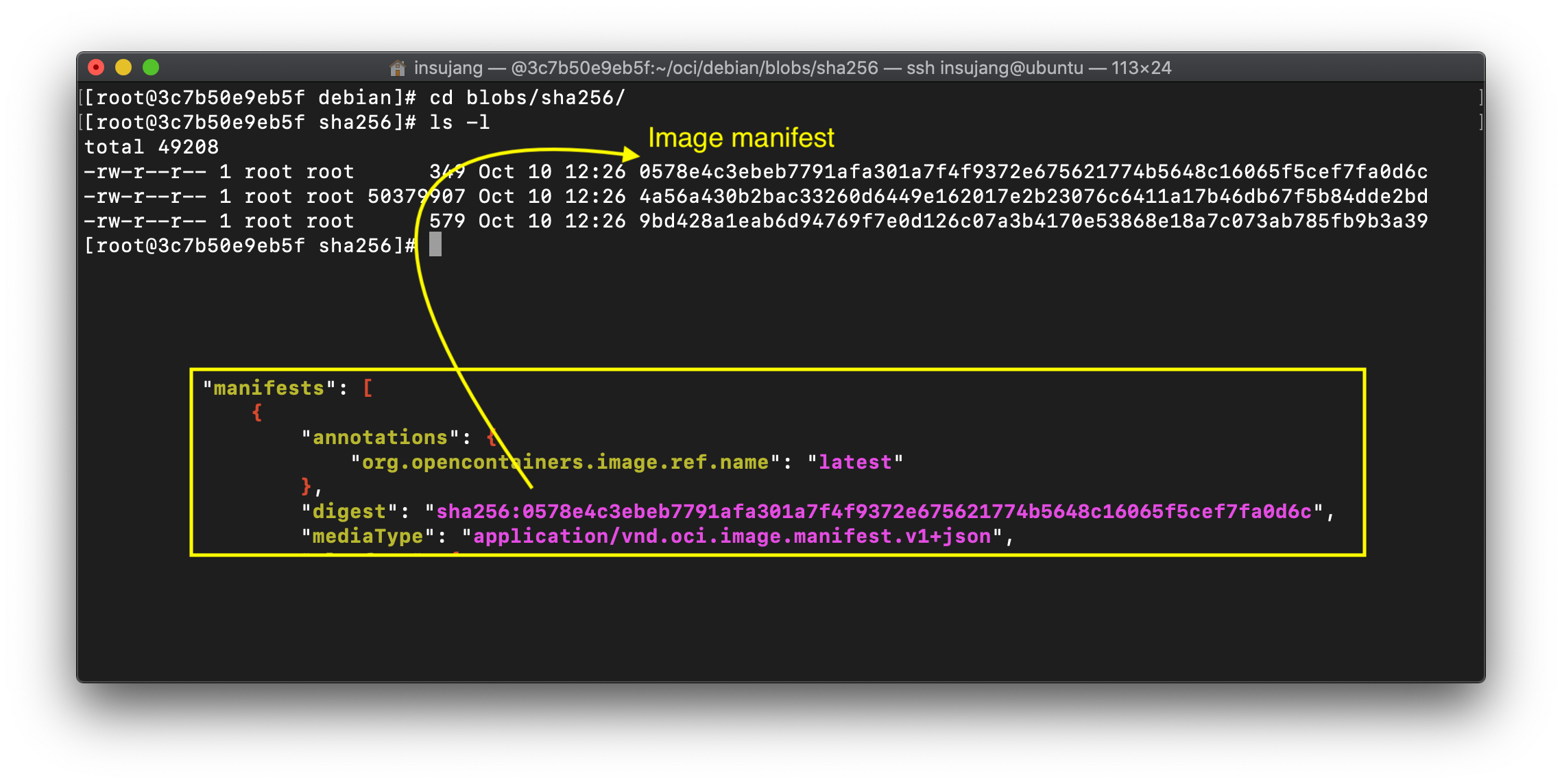 The contents of debian/blobs/sha256 directory. As indicated there is a file named with the digest sha256:0578... from index.json file. 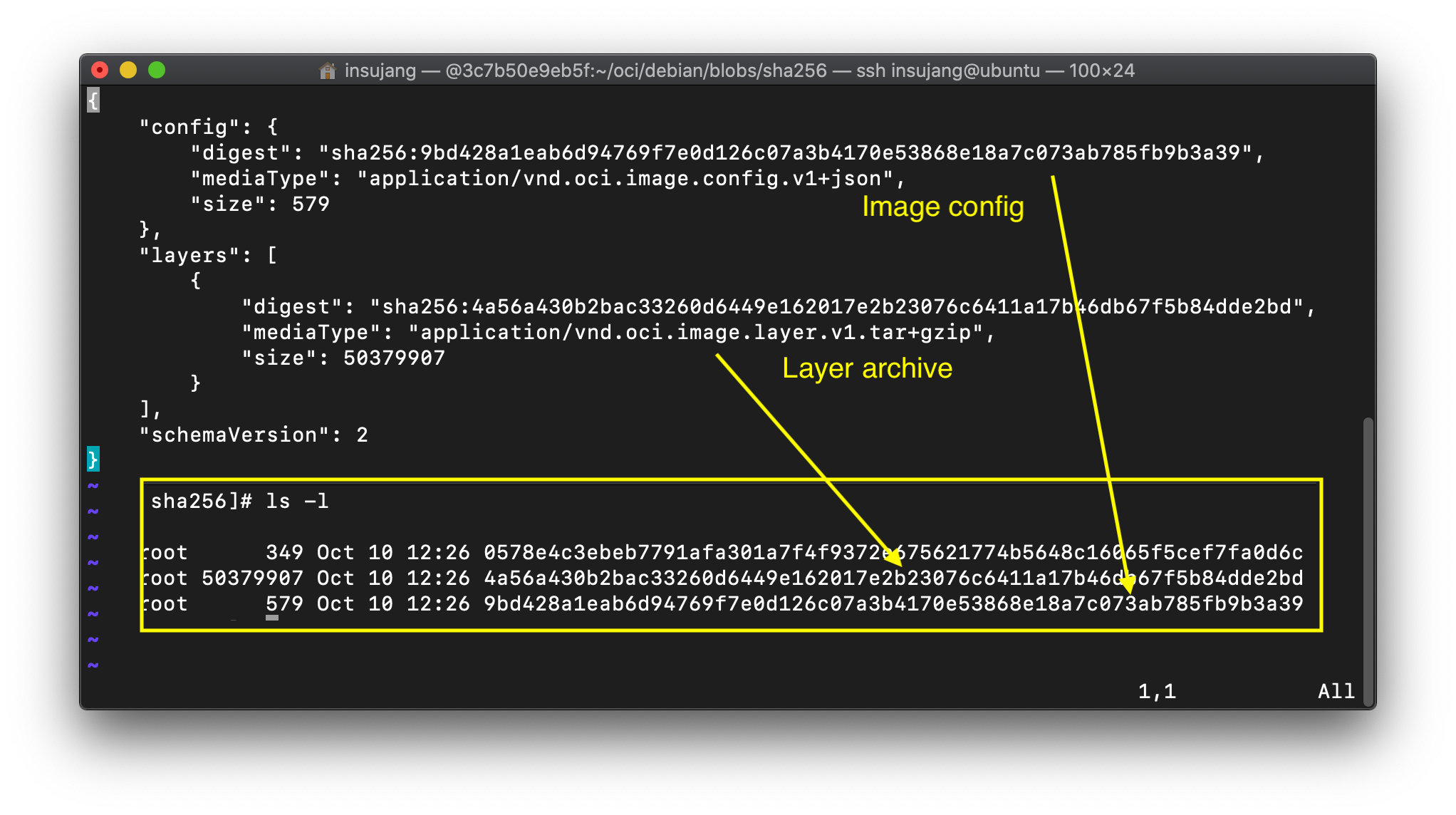 Contents of the image manifest 0578e4.... It explicitly defines the name of image config and layers. Those files are stored in the same directory with this manifest file.

As there is one tag in the image, contents of the directory blobs/sha256 is quite simple.

The OCI Image Spec is much similar to Docker images. Similar to Docker framework, where a container needs to be created from an image, a runtime bundle should be generated from the OCI image.

Detailed explanations are out of this post, just leave a link about it. There are several tools to unpack an OCI image and to generate an OCI runtime bundle.

With umoci or OCI image tool, we can unpack an OCI image to make a OCI runtime. And then, we can run a container with runc. 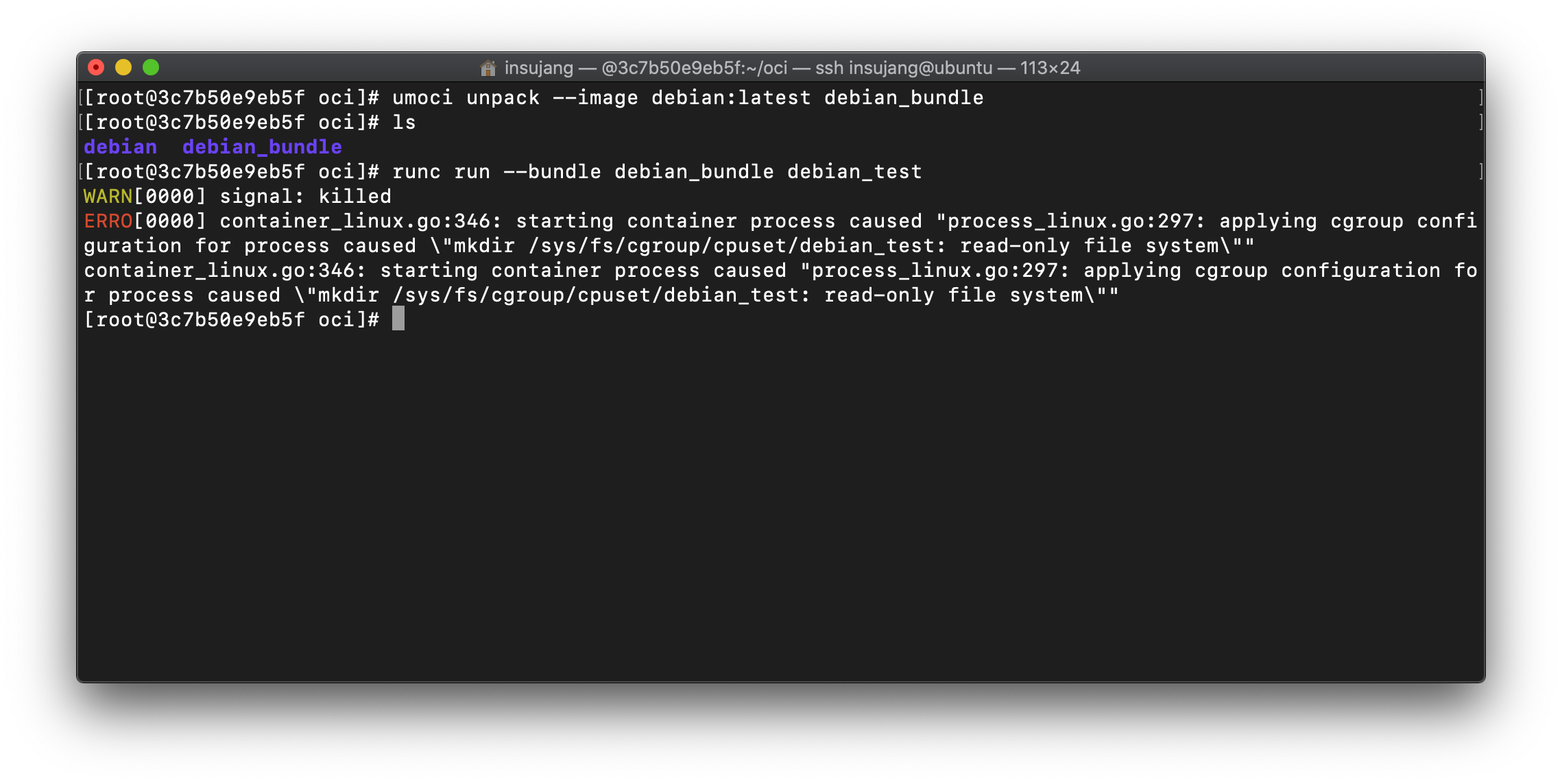 As the environment is already running in an unprivileged Docker container, running a new container inside the container is impossible due to the restricted permission. It is supposed to run normally, executing a new shell in a container.