There is a few information related to sealing, even no detailed explanation in the paper: Intel SGX explaned. All in this post are from Intel, with a little thought of mine.

Using sealing, the data within the enclave is encrypted using an encryption key that is derived from the CPU hardware. The encryption provides assurances of confidentiality, integrity, and authenticity on the data.

Note: Like Intel SGX does, sealing does not provide availability to the sealed data. Therefore, the data may be lost due to disk corruption, malicious modification (e.g. Ransomeware), etc.

Intel SGX provides two policies for encryption keys: MRENCLAVE (enclave identity) and MRSIGNER (signing identity). These policies affect the derivation of the encryption key, and this is partially explained in Intel SGX explained.

Derive a key based on the value of the enclave’s MRENCLAVE. Any change that impacts the enclave’s measurement will yield a different key, providing full isolation between enclaves.
The paper also mentions that “different versions of the same enclave will also have different seal keys, preventing offline data migration.” In other words, the MRENCLAVE-based keys are available only to enclave instances sharing the same MRENCLAVE.

While sealing with MRENCLAVE does not allow offline data migration between the same enclave with different versions, this allows limited data migration (only older version to newer version) or between different enclaves with the same Signing identity. 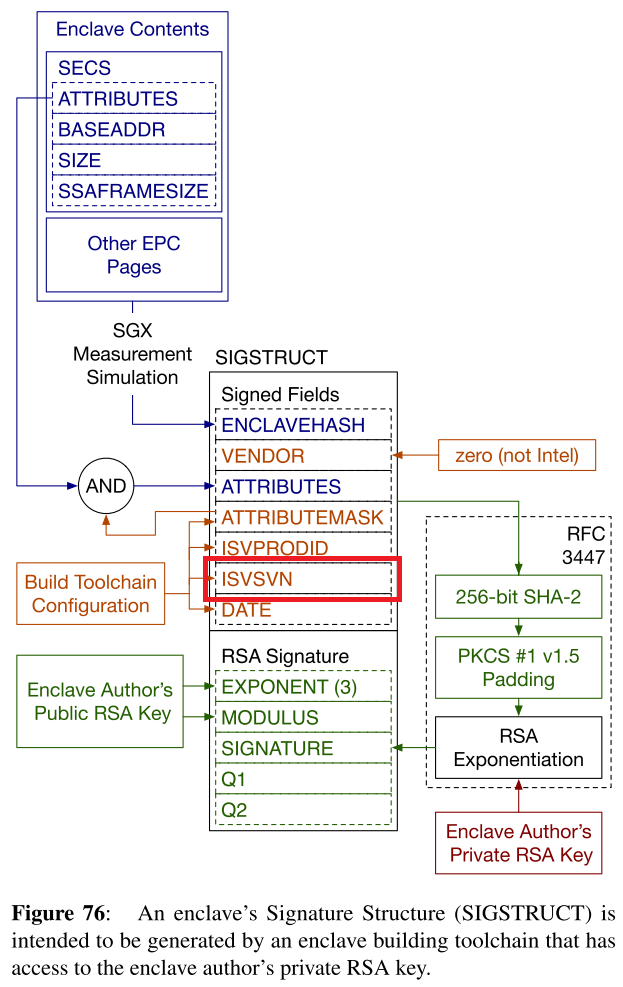 As users upgrade, SGX will facilitate the migration of secrets from the vulnerable version of the enclave to the fixed version. Once a user’s secrets have migrated, the SVN restrictions in SGX will deflect any attack based on building the vulnerable enclave version and using it to read the migrated secrets.

As explained above, a software module’s SVN should only be incremented when a security vulnerability is found. SIGSTRUCT only allocates 2 bytes to the ISVSVN field, which translates to 65,536 possible SVN values. This space can be exhausted if a large team (incorrectly) sets up a continuous build system to allocate a new SVN for every software build that it produces, and each code change triggers a build.

A very simple example data sealing code is as follows.