Fedora Silverblue 1 is an immutable desktop operating system based on Fedora Linux distribution. What immutable does mean is that most directories including rootfs (/) are mounted as read-only, and user applications run in an isolated execution environment. It is a part of Atomic Host project, and share the same underlying system with Fedora CoreOS (FCOS).

libostree (previously called OSTree) provides git-like model for managing bootable filesystem trees (binaries), along with for deploying them and managing the bootloader configuration. By using libostree, a filesystem commit (image) can be used to boot Linux, making it easy to upgrade, rollback, and manage the filesystem. To make it feasible, the filesystem is required to be always clean (without users’ configurations, etc); hence most directories are mounted as read-only.

However, according to Linux Filesystem Hierarchy Standard (FHS) 3, toe rootfs must have:

some of which can be modified by legacy packages (deb, rpm). To satisfy the FHS while keep the rootfs clean, Fedora Silverblue makes symbolic links for writable directories, such as /home to /var/home.

In Fedora Silverblue, the filesystem is immutable and stateless, and all runtime state is written and stored in /var:

This approach (making the rootfs read-only) is not new; Android 4, ChromeOS 5 have also been deployed with read-only rootfs. They also uses Linux as their base system, however, Fedora Silverblue is one of the first Linux distributions that provides Linux desktop environment with read-only rootfs (another one is EndlessOS).

Note that Fedora Silverblue uses rpm-ostree, a modified version of libostree, but in this post I will say the fundamental properties of libostree only.

So, how libostree mounts the rootfs read-only when booting the Linux kernel? libostree’s customized initramfs parses kernel command line arguments ostree=, and mounts the specified rootfs image to the rootfs.

You can find the current kernel command line argument by rpm-ostree:

The way libostree mounts the specified path into / is well documented in 6:

With the result rpm-ostree kargs above, the root (root=) is /dev/mapper/fedora-root, the physical / of which will be mounted as /sysroot by initramfs. Currently / is initramfs, and not mounted by actual device filesystem yet (step 1).

It is executed by ostree/src/switchroot/ostree-prepare-root.c [src]:

which is in ostree initramfs [src]:

and ostree-prepare-root is executed by systemd and logged in journal:

Making the rootfs read-only by libostree

OK. now we know that how libostree mounts the specified rootfs image into real /. But, although the document says the root is mouted read-only, actual mount result shows it is mounted writable:

But, I am not able to write any content in /. What happened?

At first, I thought it is controlled by SELinux, since Fedora Silverblue enables SELinux by default.

But have no luck. No audit log appended in /var/log/audit/audit.log as well (even with semodule -DB; -D indicates ignoring dontaudit flag).

the latter of which is mentioned in [the pull request]:

Add the immutable bit to the physical root; we don’t expect people to be creating anything there. A use case for OSTree in general is to support installing inside the existing root of a deployed OS, so OSTree doesn’t do this by default, but we have no reason not to enable it here. Administrators should generally expect that state data is in /etc and /var; if anything else is in /sysroot it’s probably by accident.

I just happened to think of this while working on #736

that contains a commit to add a line into the script creating a coreos disk:

i: A file with the ‘i’ attributes cannot be modified: it cannot be deleted or renamed, no link can be created to this file, most of the file’s metadata can not be modified, and the file can not be opened in write mode. Only the superuser or a process possessing the CAP_LINUX_IMMUTABLE capability can set or clear this attribute.

Here I got a hint: they use the immutable bit of Linux extended (ext2) filesystem feature. To prove whether it solely protects the rootfs, I check whether the flag is set. As the source of / is /ostree/deploy/fedora/deploy<image-commit-id>,

Got it! the rootfs directory is set the immutable bit. Now I check whether I, as the root user, have CAP_LINUX_IMMUTABLE capability:

Great, it seems I am able to clear the bit. Let’s erase it and try to write a new file on rootfs.

Funny thing is that, after writing a file at / and setting the immutable bit back on, you cannot remove the /test file either. 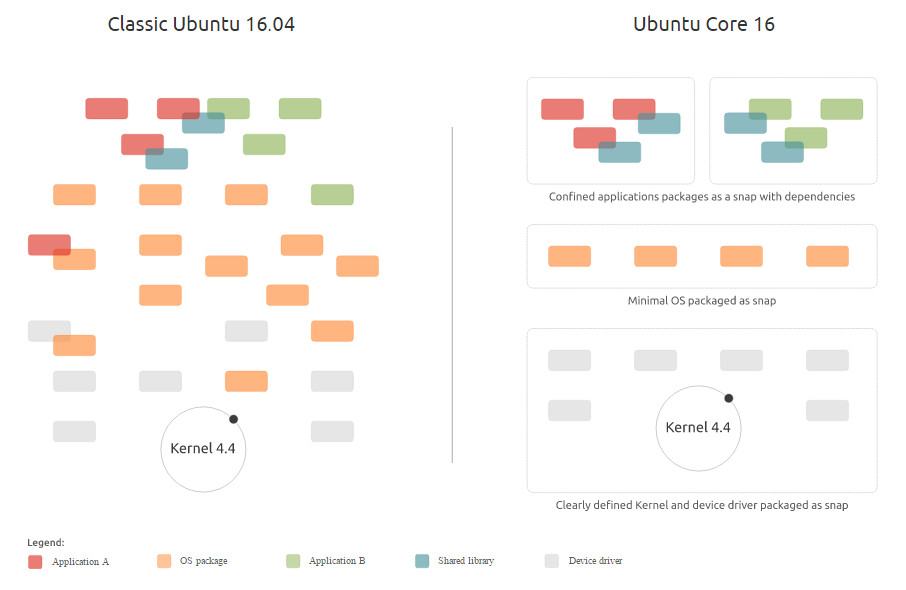 Recent packaging systems (e.g. AppImage, Flatpak, snapcraft) packages packs required libraries with the application binary itself altogether into an image, running it in an isolated execution environment without any dependencies in the host (A good example of isolated execution environment is Linux container, but it seems not the only option, as Flatpak does not always use Linux containers).

Fedora Silverblue, by default, runs Flatpak applications, and does not provide rpm and dnf package management system in the host. Note that Fedora Silverblue provides some ways to bridge the gap between traditional Linux and Fedora Silverblue; Toolbox and rpm-ostree, but I will not explain about these in this post.

Although they should be isolated from the host environment, they still require services provided by the host, e.g., accessing devices, rendering graphics, sound, printers, etc. Considering container based isolation, they are not provided by default.

Flatpak provides Portals, an interface that the process can interact with the host. It contains opening URIs, printing, showing notifications, power management, etc. For applications that does not packed with Flatpak framework many run in the isolated execution but cannot use these features.